At the beginning of November 2021 a new book has been published by Schünemann-Verlag, Bremen, in which I am involved as co-author. I was responsible for a list (including short biographies) of the 126 sailing and steam ships that once belonged wholly or proportionally to the shipping company D. H. Wätjen & Co. or were managed by them. In addition, the book will contain and comment on all known ship portraits of Wätjen ships.

First reviews can be found at the following links:

More details about the book can be found on the publisher's website at: 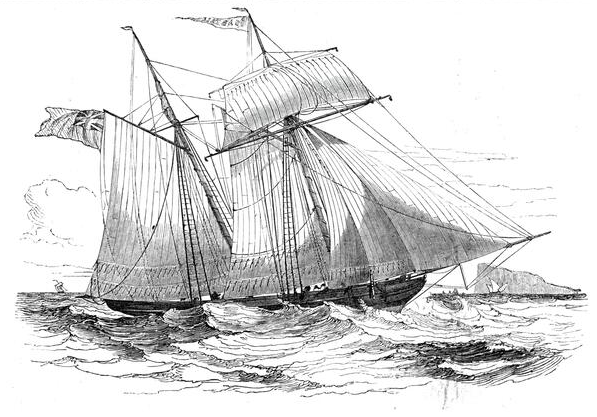 An unusual ship with an unusual curriculum vitae was the schooner HANS, which sailed under the Oldenburg flag in 1863 and 1864, but never came close to its supposed home port of Brake. Only now, after the publication of Volume IV "Von der Weser in die Welt" in December 2020, which deals with the sailing ships built in England having their homeports on the River Weser, have I succeeded in meticulously piecing together the puzzle of this ship's origin and fate with research in a wide variety of sources and finds in the most unexpected places.

It all began in 1831 with the launching of a schooner at a local shipyard in Hastings on the English Channel coast. The Sussex Advertiser newspaper of May 2, 1831 reported:

On Wednesday morning a fine schooner, 125 tons, with 14 port holes, handsomely modeled, intended for merchant service, was launched from Thwaites' yard. The vessel floated at a little before eleven o'clock, with several persons on board and a band of music enlivening the scene.

The vessel was the fruit schooner ISABEL, built for the London firm of J. & J. Adam & Co. which had become one of the leading companies in the importation of citrus fruits. Brothers John (1890-1860) and James Adam (1797-1856) were from Morayshire in Scotland, and their company existed well into the 20th century. The ship was probably named after their mother Isabel.

For almost 30 years, the ISABEL sailed for J. & J. Adam & Co. and regularly called at Spanish, Italian and Turkish Mediterranean ports such as Alicante, Denia, Messina and Smyrna; Sao Miguel in the Azores was also a regular port of call. In 1840, the ISABEL was lengthened, and in an article on the British fruit trade in the London Illustrated News of June 29, 1844, she was even pictured as a typical representative of the fruit schooner type.

The ISABEL was acquired by the Hamburg firm Cordes & Co. under a contract dated November 23, 1858. I have not been able to find out anything about this company so far, they owned ships since about 1854, the last one was sold in 1867. Cordes & Co. owned, among others, the schooner galliot FUTTY SALAM from 1862 to 1865, which was built as COURIER in 1852 by the shipyard Oltmann in Motzen on the Weser (see "Von der Weser in die Welt", Vol. I, p. 444). The ISABEL retained her name under the Hamburg flag. She sailed under the command of Captains H. P. Tewes and C. F. Westedt in a kind of triangular trade between Lagos in West Africa, Bahia in Brazil and Hamburg. On December 30, 1861, Captain Westedt sailed the ISABEL to the Far East: on October 22, 1862, she reached Singapore and finally arrived in Hong Kong on December 27, 1862. The agent there was the well-known firm Wm. Pustau & Co. of Hong Kong and Shanghai.

In mid 1863, the ISABEL was brought under the Oldenburg flag in the name of Captain Heinrich Oltmanns, a native of Brake. The ISABEL was now renamed HANS. How this came about legally is unclear; apparently Carl Brodersen, partner of Wm. Pustau & Co. and at the same time consul of the Grand Duchy of Oldenburg in China, was involved in this transaction. Later newspaper reports indicate that a partner of the Pustau firm was also the actual owner of the ship (without nameing him) and that Oltmanns only acted as owner in a fiduciary capacity. Possibly the legal owner was the consul Brodersen, but this is not certain.

The following events can be gleaned from newspaper accounts in Hawaiian, US and Mexican newspapers. The schooner HANS was freighted in Hong Kong and sailed with a full cargo across the Pacific to the Mexican port of Mazatlan. Here Captain Oltmanns sold the cargo and sailed the HANS to Honolulu, Hawaii. There he apparently spread the fairy tale that the HANS was the former yacht of an English nobleman, which was not true, but matched the fact that the ship had been built in England. In any case, he offered the ship for sale in April 1864 for $6,000, and indeed the former Chief Minister of King Kamehameha IV, who died in 1863, and advisor to the new King Kamehameha V, bought the HANS for only $2,500 as a Royal Hawaiian yacht. The schooner (now occasionally called a schooner brig or brigantine) was renamed NAHIENAENA after the famous Hawaiian princess.

Captain Heinrich Oltmanns, who was not authorized to sell the ship, shared the proceeds with his mate Eugen Ferdinand Koller and set off in female company to Mexico. Here, his actions are said to have been "discovered", and he may have committed other crimes as well; in any case, the Mexican authorities are said to have executed him by hanging. However, this has not been verified. The Honolulu Pacific Commercial Advertiser newspaper wrote on September 12, 1868:

Capt. Oltmanns, after selling the vessel, which belonged to other parties, and pocketing the proceeds, went from here to Mexico, where he engaged in some unlawful traffic, was captured by the Mexican Government and hung. He left behind him anything but an enviable name, and two widows to mourn his fate.

Captain Oltmanns left behind in Mexico not only two grieving "widows" (one of them is said to have been the wife - or mistress? - of the mate, but also a real wife in Brake. According to the current state of research, he was Hinrich Oltmanns, born on February 26, 1826 in Brake, who had married Mette Sophia Gristede in Hammelwarden in 1851. Since she married again in 1877, Hinrich Oltmanns must have been dead verifiably or at least declared dead at that time. All very mysterious!

The royal yacht NAHIENAENA did not prove itself as such and was sold for commercial business in Honolulu in 1866. With the new name BLOSSOM, she was used as a merchant ship, possibly rigged as a brig at times, between the Hawaiian Islands as well as in Micronesia (Ascension, Marshall Islands). In September 1868, the BLOSSOM was broken up in Honolulu.